"Designed to reframe overlooked or forgotten works of cinema and to offer a new artistic challenge to the contributing musicians, Imaginal Soundtracking acts as a dialogue between the creative minds at play. The first release in the series, out digitally on June 19, sees a quartet of highly inventive, wildly varying takes on award-winning animation There Will Come Soft Rains, created in 1984 by Uzbek filmmaker Nazim Tulyakhodzayev. The film is based on a short story of the same name by Ray Bradbury, itself a reference to a 1918 work by US poet Sara Teasdale, which foretells the danger of mankind’s extinction by war, predating many such fears by some decades. Characteristic of Soviet filmmaking of the time, Tulyakhodzayev's adaptation is abstracted by layers of allegory and interpretive meaning, rendering it bizarre, sometimes lysergic, but nonetheless arrestingly powerful and hauntingly relevant today in its story...

"Watch the film and listen to acclaimed London based Japanese producer Masaaki Yoshida's (better known as Anchorsong) unique interpretation...  His lamenting, piano-led score highlights the futility and sadness of the story. A single, gentle, repeated pulse holds the tempo while soft chords respond to the film’s increasingly bleak imagery. He retains the robot’s voice from the original film, building his own composition around it."

Tulyakhodzayev made an adapation of another Ray Bradbury story, Veld, in 1987 - live action rather than animation. You can watch it here.

Posted by SIMON REYNOLDS at 10:22 PM No comments: 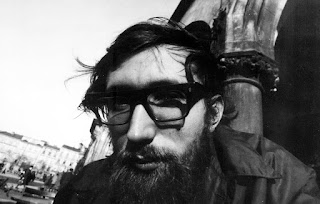 'His works are characterised by the "non-camera films" technique, with which he explored transience and fallibility by doing away with the camera in favour of applying animations directly onto film... Fascinated by kinetic toys, optical machines and the variety of effects attained by experimenting with film tape, Antonisz strove to uncover the roots of cinema and created his own devices for producing films using a non-camera technique. Many of his findings were published in his 1977 Artistic Non-Camera Manifesto. In formulating his vision for producing works directly on film tape, he surmised that "Only films made with the Non Camera technique can be called authentic works of visual, painting, graphic and musical art"'

Posted by SIMON REYNOLDS at 5:21 PM No comments:

"A young artist, a career full of promise, a life of innovation and energy tragically cut short. Such a summary barely begins to describe the bright, fast burn that was rising star Adam Beckett (1950-1979), one of the first graduates of the CalArts Experimental Animation program, and a prolific animator, sketch artist, and effects prodigy. Known for his unique abstract film loops, as well as for his precise, yet organic work with the optical printer, Beckett’s work continues to influence young animators both at his alma mater, where he is frequently mentioned, as well as in the wider animation world....

"Before joining the then-new Experimental Animation Program at CalArts, Beckett had studied mathematics. A seemingly incongruous link, his ease with numbers and abstractions would prove essential, and made him a natural when it came to manually exposed and re-exposed animation.
Appropriately, Beckett's earliest works are very much a representation of the direction of Jules Engel's Experimental Animation program in the early 1970s. Engel, a former animator at Disney, and later UPA, was at that point a dedicated abstract expressionist whose interests were concentrated in visual music and painterly, geometric animation. The influence of this iconic program chair can be felt in early Beckett pieces like the musically-driven Dear Janice, with its mixture of abstract cycles, words, sexual imagery, and live footage, or in Kitsch in Synch, where playroom shapes build and build in time to a nonsense chant that grows from child-like voices to wild cacophony....  Works such as Evolution of the Red Star, with its cycling, multiplying shapes, color tinting, and playful use of the animated frame, or Heavy Light, with its energy trails optically printed on black, showcase Beckett’s sense of experimentation and personal evolution. The figure makes an appearance, too, memorably in the pornographic, yet placid, Flesh Flows with its homages to Schiele and Dali enveloped by pulsing, gradually distorted imagery....

"In many of the shorts, Beckett’s focus is on rhythm, and on new configurations of repetitive movement and morphing shapes....  In his work, Beckett displays an easy mastery of the optical printer, used to create multi-layered effects that, at the time, were a far cry beyond what was capable using a single or multi-plane downshooting rig. For those unfamiliar with the technique, an optical printer is a device that links one, or several, film projectors to a movie camera, allowing for the re-photographing, layering, and alteration of film.

"...  in Beckett’s case, this understanding of the optical printer’s range of uses straddles both the art and VFX fields. Shortly after graduating from CalArts, Beckett went to work at Industrial Light & Magic. His previous experiments with the optical printer, particularly the so-called Knotte Grosse Experiments, and his tinkering with the roto camera setup at Lucasfilm paid off, as Beckett was put on visual effects development for a new science fiction film called Star Wars...."
- Zoe Chevat, Animation World 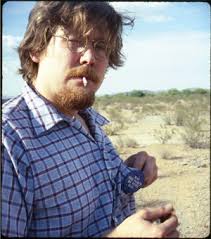 
Posted by SIMON REYNOLDS at 3:38 PM No comments: 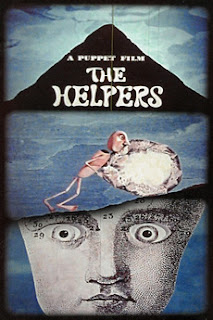 Czechoslovakia’s animation industry dates back to the 1920s but really flourished in the post-WW2 era when it was taken over by the state. Figures like the genius puppet maker-manipulator Jiří Trnka and Hermina Tyrlova created a series of innovative entertainments largely aimed at children, while Karel Zeman blended live action and animation in films based on the work of Jules Verne and the fictionalized but historically real figure Baron Munchhausen. Later, the eldritch stop-motion creations of Jan Švankmajer won international acclaim.

Josef Kluge is a lesser-known figure in the annals of Czech animation but “The Helpers” (1968) is a gem. In this grimly satirical and slyly subversive update of the Sisyphus myth, a man pushing a rock up a hill is impeded and further burdened by an officious swarm of bureaucratic busy-bodies wielding triplicate forms and red tape. As with so many Eastern European animations of the Sixties and Seventies, the music – in this case by Jiří Bažant and Jiří Malásek – and the sound effects are gloriously peculiar, an eerie  entertainment in their own right.


Posted by SIMON REYNOLDS at 10:37 PM No comments: 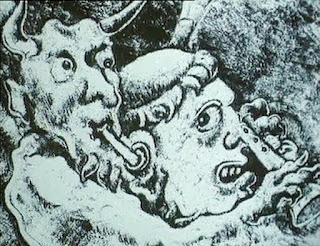 "... the creators of an original technique of animation using black quartz sand....  Born in 1925 in Lausanne, Ernest 'Nag' Ansorge moved to Etagnières with his wife Gisele in the late 1950s, where the couple established a film workshop specializing in newsreels for local cinemas. During the sixties Ansorge and Giselle made their first two sand animation films, Crows (1966) and Fantasmatic (1969). A co-founder of ASIFA Switzerland, Ernest Ansorge helped guide the organization both as secretary general and president for nearly 25 years. ASIFA Switzerland remains the only professional association for animation in the country. Following Giselle’s death, in 1993, Luc Plantier and Michel Froidevaux wrote a book about the couple, “Pris dans les sables mouvants” (“Captured In Drifting Sand”), which is published in French and English by Edition Centre International du Cinema d'Animation." - Animation World Network 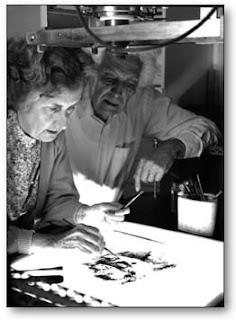 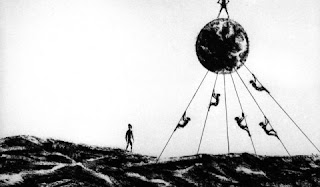 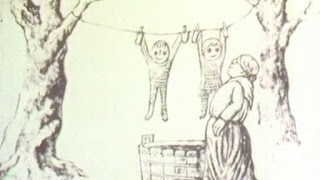 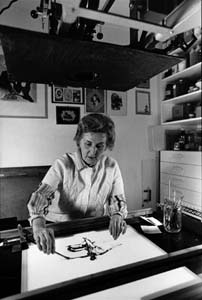 PF1192 Nag Ansorge - Cinéaste from Films Plans-Fixes on Vimeo.
Posted by SIMON REYNOLDS at 11:59 AM No comments:

"In 1950 Haanstra made Mirror of Holland, combining his talent as a filmmaker with his eye as a painter. Holding the camera upside down, he filmed images of Holland reflected in water. The effect is strange and delightful. It astonished critics and the public alike. Mirror of Holland was Haanstra's first success abroad. It was shown at the Cannes film festival, and won a Golden Palm: the country boy from Holland travelled to Cannes to take a bow and receive the award. He returned the following year as a member of the jury chaired by Jean Cocteau. He became friends with Jacques Tati, who he considered the best in his field. During that time he made a drawing of Cocteau and Tati together.

"The film was a huge success in the Netherlands as well. The film provided first class entertainment, but was admired above all for the lyrical play of light, shadow and colour. Haanstra had established himself as a filmmaker and his reputation drew many people to his films. He particularly appealed to the Dutch, who loved seeing their country through his eyes: his films gave new meaning and colour to their daily life. The feature films he made years later inspired a similar affinity, and millions enjoyed Haanstra's vision and outlook, his gentle humour and his affectionate view of his country and its citizens.

"In 1952, Haanstra made Panta Rhei , another view of Holland through the eyes of a painter and filmmaker. Its poetic images of water, skies and clouds reflect Haanstra's own moods. People are conspicuously absent from Haanstra's earliest films. The famous Russian director Vsevolod Pudovkin remarked on this at the festival in Cannes, saying: "In my own mind Mirror of Holland has people". To which Haanstra replied: "I am still a beginner. I have mastered the camera, I can handle nature, but l've not yet learned to handle people and their problems. That's still too complicated. But I'll get there…”  - http://www.berthaanstra.nl/ 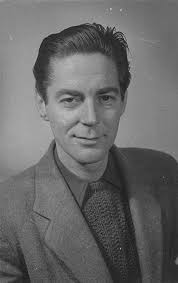 Posted by SIMON REYNOLDS at 12:43 PM No comments: