"To be an animator requires a methodical and systematic mind, diligence and meticulous attention to detail, and the patience and sheer stamina to withstand long-haul, labour-intensive  and hideously fiddly work. Harry Smith was unusually endowed with these qualities. Although best known for his work as a collector of obscure folk and blues 78 rpm recordings (resulting in 1952’s epochal and hugely influential six-LP compilation The Anthology of American Folk Music), McLaren’s true passion was animation.
"Using various self-developed techniques of hand-painting and marking the film using masking tape,  working with scratch-board drawings, and cut-out images, Smith would spend years holed up in his New York apartment toiling over a single film.  His animations often reached several hours in length and required drastic editing down before he could show them.  Many projects were abandoned in an unfinished state. On their rare public performances, Smith would project the films onto special painted screens of his own construction. Music – usually jazz  – was central to his work, as with the original version of Thelonious Monk’s “Misterioso” that soundtracks “Mirror Animations”.
"Like his hour-long masterpiece “Heaven and Earth Magic”, “Mirror Animations” (1956-57) emerged out of Smith’s obsessive collation of illustrative material from 19th Century catalogues.  He filed the cut-outs – photographs or drawings of people, animals, vegetables, tools, furniture, and sundry other objects -  in glassine envelopes for protection, while noting on file cards every possible interaction that a given image could have with another image.  Yet, contradicting all this obsessive-compulsive preparation, when it came to the assembly process, Smith aimed for a state of mental vacancy akin to automatic writing.


"The deliberately stilted movements of the snipped-out images have a quaint and creaky quality that casts back to the magic lanterns of the 17th Century. Magic of a different kind – not conjuring tricks and illusions, but the occult and hermetic knowledge – suffuses Smith’s work. Some of the imagery in “Mirror Animations” looks like it’s plucked straight off a set of Tarot cards.  No wonder film-maker and critic Jonas Mekas celebrated “the magic cinema of Harry Smith” while avant-jazzman John Zorn hailed him as a “Mystical Animator”."  - SR 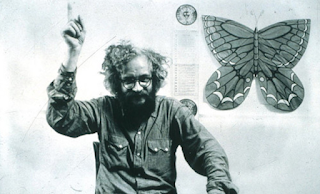 ".... An eccentric polymath. He painted, made experimental films, practiced occult alchemy (he was ordained in the Ecclesia Gnostica Catholica, a spiritual group affiliated with the magician and self-appointed prophet Aleister Crowley), and believed that the careful accumulation and ordering of things could bring about new knowledge....  Smith collected all sorts of stuff: paper airplanes, Ukrainian Easter eggs, figures he made by looping or weaving lengths of string, anything shaped like a hamburger, and thousands, if not tens of thousands, of 78-r.p.m. records... Like many serious collectors of arcane but precious objects, Smith could be irascible, mean, and single-minded to the point of psychopathy. There are stories of his thieving, particularly when he believed that an item would be better off in his care. He never married, drank to unconsciousness, went absolutely nuts if anyone talked while he was playing a record, and, according to his friend Allen Ginsberg, kept “several years’ deposits of his semen” in the back of his freezer for “alchemical purposes.' "
- Amanda Petrusich, in The New Yorker, on The Harry Smith B-Sides, a box set of the flipsides of all the 78 rpm tunes that he collected on The Anthology of Folk Music. 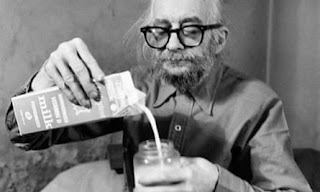 Confession: I have owned the reissue of The Anthology for a couple of decades now,  but only ever got round to playing one of the discs. When I did, I unawares miscued the CD-player controls -  as a result, one particular Dock Boggs song played over and over for about 35 minutes. It took me quite a while to notice - about 20 minutes in, I was like "wow this is intense, this endless incantatory folksong saga, verse after verse!". Eventually I twigged what had happened.
Never went back to the set - never seemed like the right time, always something more pressing in the present, or a corner of the past that seemed more compelling. Perhaps it's finally time - indeed the box is sitting reproachfully near the front of the records by the stereo. Should definitely listen to  first, before getting on to the B-sides... 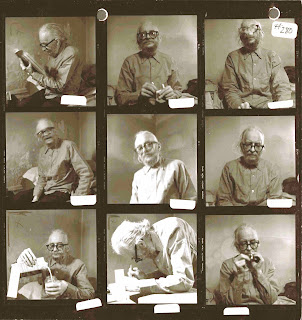 Posted by SIMON REYNOLDS at 5:57 PM No comments: