"Michael Bentine's first appearances on television were as presenter on a 13-part children's series featuring remote controlled puppets, The Bumblies, which he also devised, designed and wrote. These were three small creatures from outer space who slept on "Professor Bentine's" ceiling and who had come to Earth to learn the ways of Earthling children. Angelo de Calferta modelled the puppets from Bentine's designs and Richard Dendy moulded them in latex rubber. He sold the series to the BBC for less than they had cost to make" - Wiki

This is the later series I remember from childhood: Michael Bentine's Potty Time.

"Michael Bentine lost the power of speech for 13 years as a child but recovered in time to attend Eton. Following his education and wartime service during WWll, he decided he wanted to be a comedian and auditioned at London’s famous Windmill Theatre. It was here that he met fellow ex-services entertainer Harry Secombe. Secombe introduced Bentine to his friends Spike Milligan and Peter Sellers, and the group would often meet up at a pub run by Secombe’s writer and agent Jimmy Grafton. From those meetings at the Grafton Arms, the quartet developed the idea for The Goon Show, which went on to become the most famous British radio show of all time.

"Bentine left after the second series to continue touring in his own show and in 1954 was offered a TV series by the BBC – A children’s puppet series called The Bumblies. Following numerous appearances on other shows and another series, After Hours (1958-59), he made his best-remembered series It’s A Square World. Potty Time saw Bentine return to his Children’s TV roots, with puppets made by Joan and Stan Griffiths and operated by The Barry Smith Theatre Of Puppets.

"When promoting his new Potty Time show in 1974, Bentine described ‘Potties’ thusly: “they are really Bumblies with clothes and hair on. They live in their own Potty world and have their own Potty history”. The cast included 26 Potties, about ten of which were used in each programme."
- Nostalgia Central

Posted by SIMON REYNOLDS at 10:38 AM No comments:

"In this extremely rare surviving example of “Auroratone” films, abstract visuals are created by
filming crystalline growth using polarized light and time-lapse photography. Melancholic sentimental
music plays, crooned by Bing Crosby. All but forgotten today, the Auroratone films were produced in the early 1940s by an obscure British inventor and mystic named Cecil Stokes (1910-1956). He intended for them to be used as a therapeutic aid in the treatment of post traumatic stress, manic depression, anxiety disorders, and similar conditions. They were much like this one – slow, mildly sad and melancholic music combined with imagery, usually abstract, but some used semi-animated drawings instead, according to contemporary descriptions.

"Stokes was awarded a patent for his film process in 1942, and he formed the Auroratone
Foundation of America to make and distribute his films. One of his partners in the effort was Bing
Crosby, who also contributed new song recordings to a number of them. Auroratone films were donated to a number of hospitals in the US and England, where records indicate they were indeed used as part of therapy with vets. One of them was a VA hospital in Ohio, where the trial program led to a series of articles in major medical journals, written by Capt. Herbert E. Rubin
and 2nd Lt. Elias Katz of the Crile General Hospital in Parma, Ohio. They consistently reported positive benefits. “Most patients became more accessible” after watching the films. They “spoke more freely,” making it “possible for the psychiatrist to establish rapport.” Curiously, an article about Stokes and his Auroratone films also appeared in a 1944 issue of Rosicrucian Digest.

"According to reports published in Billboard magazine, Stokes later hoped to make the films
available to the general public in “film jukeboxes,” commonly known as Scopitone machines, which were popular in bars and lounges during the 1940s and ‘50s. In the summer of 1945, he made a presentation to a number of such distributers in Chicago, but the businessmen demurred, reportedly saying “the haziness of the color pattern – or lack of pattern – made the process unsuitable for adaption to jukes.” In a word, it was just too weird. The record fades after that, except to note that Stokes died less than 10 years later." 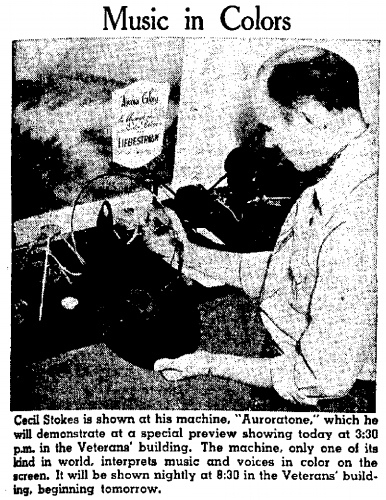 Posted by SIMON REYNOLDS at 1:25 PM No comments:

Email ThisBlogThis!Share to TwitterShare to FacebookShare to Pinterest
Labels: 1943, AMERICA, AURORATONE, CECIL STOKES, When the Organ Played ‘Oh Promise Me’

“Pony Glass” (1998) drops us in the thick of the retro-pomo era. Where the Pop Art aligned films of Jeff Keen responded to contemporary pulp inputs and info overload, Lewis Klahr’s film languidly oozes nostalgia for mid-century America. Collaging cut-out images from glossy magazines, mail-order catalogues and comic books, Klahr is attentive to the contrasting grain of the archival materials he’s recycling (there’s also an occasional dried leaf intruding an incongruous real-world feel).  Characters talk through speech bubbles, but the text mostly consists of meaningless swatches of print ripped from books or newspapers. Sound-tracked by Sinatra or pre-WW2 ballads, the mood of this three-act piece is romantic and wistful, yet prone to irruptions of pure porn: watch out for erections poking out at unexpected moments, for the cheeky female finger probing a male rectum.

If you dig “Pony Glass’, check out Klahr’s earlier “Altair,”  constructed largely from images taken from 1940s issues of Cosmopolitan. “When I first started doing this, in my late twenties, I was really trying to bring my childhood back,” Klahr told BlouinArtInfo. “I wanted the world to look like that again. As I aged, and as I grew as an artist...  it was more about memory.... It’s a place I like hanging out.” 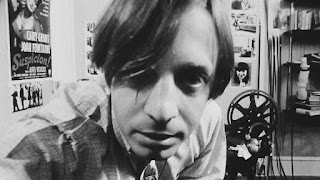 Posted by SIMON REYNOLDS at 8:33 AM No comments: