"One of the Polish greats, Kamler made most of his classic animations in France, where he forged working relationships with musique concrete composers like Luc Ferrari,  Francois Bayle, and Bernard Parmegiani. The latter soundtracks “The spiderelephant” (1968) with wondrous avant-whimsy.  The film itself takes us into a glowing otherworld inhabited by the eight-legged pachyderm of the title.  Don’t worry about the narration in French, just relax into this exquisitely rendered tone-and-texture poem of crinkly iridescent lines and mottled patches of pink, violet, and grey. Every shot is like a Rothko if his career had been diverted into children’s storybook illustration.
"If you enjoy “The spiderelephant”, try out Kamler’s similar  “La planète verte” – or the quite  different atmosphere / look of “Delicious Catastrophe.” Between 1977 and 1982, Kamler devoted five years of his life to creating a  full-length animated science fiction movie called Chronopolis – then, possibly completely shagged out, he returned to Poland and switched artistic lanes to  sculpture."
- SR
"Kamler began studying as an artist in his native Poland in the 1950s – an era that saw an extraordinary flowering of creativity in the realm of experimental animation in Eastern Europe – but soon relocated to Paris. There he became involved with the Service de la Recherche at ORTF, France’s national agency for radio and television at the time. Among the entities working within the Service de la Recherche was the Groupe de Recherches Musicales (GRM), which remains legendary within the history of avant-garde music as an epicenter for composers, musicians, and technicians experimenting with electronic composition, musique concrète, and other forms of acoustical research. Among those working under the umbrella of GRM were such luminaries as Luc Ferrari, Iannis Xenakis, Beatriz Ferreyra, Bernard Parmegiani, Ivo Malec, and François Bayle, all of whom would collaborate with Kamler to provide soundtracks for his films.
"Kamler’s early films are predominantly abstract, emphasizing color, shape, and motion to create a counterpoint between image and sound. He moved increasingly, however, towards representational imagery, favoring surreal, haunting figures and fantastic environments whose symbolic suggestiveness and existential starkness are highly reminiscent of the work of other Polish animators like Walerian Borowczyk, Jan Lenica, Daniel Szczechura, Stefan Schabenbeck, and others. Using a wide range of techniques – from ink to pinscreen to rotoscoping to clay – Kamler created numerous short films from 1959-75, before devoting himself for the second half of the 1970s to the painstaking creation of his magnum opus, the feature-length CHRONOPOLIS, a dizzyingly inventive sci-fi allegory concerning the nature of time." -  Anthology Film Archives 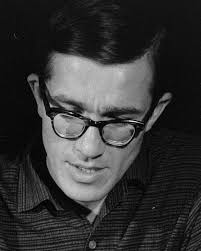 "Piotr Kamler’s SF film Chronopolis (1982) is a hypnotic exercise in sinister science whose imagery is lifted from an archaic stone vault. Against an unsettling patina of musique concrète composed by Luc Ferrari, we are plunged into a far future existence where immortal beings ensconced in a celestial city perform apathetic conjurations of matter. An external force, explorers climbing the pillars (?) that hold up the city, presage a deliverance from the languor that afflicts all.
"... In Chronopolis the hieratic denizens perform science as a ritual to hold off inexistence. The science itself appears primal, a knowledge forever know, but abstracted as mesmeric movement...
"The city, formed as if from astronomical telescopes and astrolabes, takes on the appearance of an ancient mausoleum wall, the figures chiseled yet animate, accessible though a causeways of gates. Kamler deliberately evokes the feel of Egyptian hieroglyphics without direct references. Or the pressing of a Phoenician seal into wet clay. The effect is timeless. The city has always been. The incantations that fill the sacred space continue. The musique concrète, the manipulation of found sounds, further enhances its timeless qualities.
"Like an animate Remedios Varo painting, this is an immersive experience with only fragments of plot."
- Joachim Boaz, SF Film Ruminations
Posted by SIMON REYNOLDS at 3:03 PM No comments:

Brighton-based Jeff Keen was an important figure on the  1960s British underground scene of happenings and “expanded cinema”. This film “Irresistible Attack” comes from 1995 but is essentially of a piece with his earlier work  - typically consisting of short bursts of rapid-fire imagery, scrawled drawings, roughly clipped photographs from magazine advertisements and newspaper stories, and sometimes 3D objects like plastic toys that melt before our eyes.  Although not typical ‘visual music’ in the sense we’ve seen earlier in this video-lecture, there’s two connections to music here. There’s a violence that convulses Keen’s work, in both the editing and the imagery itself - endless explosions and savage acts, mutilated scraps from the mass media, the burned black materials. That reminds me of Bomb Culture by Jeff Nuttall – a British counterculture contemporary of Keen’s, although involved in experimental poetry more than the visual arts – in which Nuttall writes evocatively about the orgiastic violence coursing through the music of the Sixties – the overloaded, distorted guitars, the heavy amplification, The Who and Hendrix destroying their instruments onstage – which Nuttall saw as a kind of Dionysian reaction to the threat of living under perpetual threat of nuclear obliteration (hence "bomb culture") as well as to contemporary carnography of Vietnam. Another music connection is the soundtrack, which Keen made himself, using processed shortwave radio sounds and other electronic effects. The scores to the films were released a few years ago by Trunk Recordings under the title Noise Art. ” - SR, from a video-lecture given at the Tate Modern. 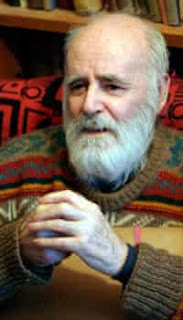 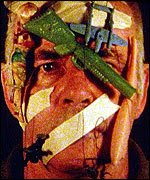 "Jeff Keen was no minimalist. You’re apprised of that at the entrance to this selection of works from the 1950s to the ’90s, where several of the late artist-filmmaker’s early films are looping. The opening two minutes alone of Meatdaze (1968) – an eight-minute 16mm film intended as a compacted simulation of an entire movie programme – overwhelm the eye with intensely accelerated and inventive footage; rewatching it on the BFI boxset GAZWRX: The Films of Jeff Keen (2012) invites athletic use of the pause button. To a thunderous soundtrack of kitsch war-movie orchestrations and booming bombs, a cut-out biplane soars through a gallery of Old Masters, red goo bursts from an anatomical drawing, torpedo-like cocks spurt, giant bubbles menace a doll’s house … and that’s about two seconds’ worth....
"The Brighton-based artist and pioneer of expanded cinema, who died last June aged 88  had served in World War II, working on experimental tanks and aeroplane engines. Afterwards he became interested in Surrealism and Art Brut.... He took up filmmaking as British art went proto-Pop. All these influences bubble through his wildly inclusive films, whose ensemble casts, multiple exposures and haywire storylines echo and perhaps anticipate those of Andy Warhol and Jack Smith. They’re reflected, too, in his auxiliary production of 2D works (replete with forces-style stencilled texts on dirty grounds), assemblages and sculptures, barely seen outside Brighton galleries until a couple of years ago, when Paris’s Galerie du Centre began showing his paintings. 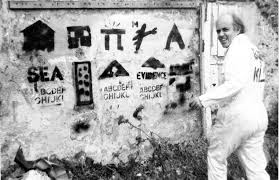 "The result is that this show, which touches all bases, feels like a soup made out of individual soups, scalding hot and, in places, burnt. Keen’s art is structurally gristly, but what comes out of it most strongly is a translocation of the violence he witnessed in war into culture, wherein it might provide an exhilarating headfuck that retains a latent critical dimension. He seems to have been warring with categories and borderlines from the start, and comes off as a rigorous anti-formalist as well as a reflector of unstoppable bodily energies....  ‘It’s Auto-Bio-Graphik / But not an Autobiography / Direct Projection / & not an illustration / See the world drawn inside-out…’ he once wrote.
- Martin Herbert, Frieze, 2013.
Interview with Jeff Keen by Jackie Foulds & Duncan White. 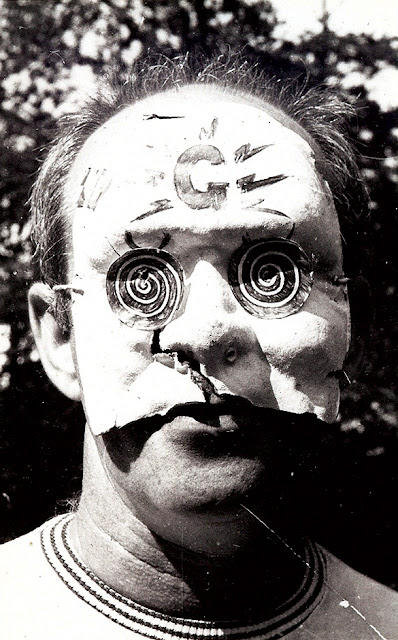 Posted by SIMON REYNOLDS at 6:52 PM No comments: