First shown in Frankfurt in 1921, “Lichtspiel Opus I” was hailed as the birth of a new art form,  christened as “Visual Music” by one critic and “Absolute Film” by another. Ruttmann created his abstract animation – “Lichtspiel” translates as “game of light” –by daubing oil paint onto a glass plate, then wiping it clean or augmenting the pattern for the next frame he shot. Informed by his studies of painting and architecture and his work as a graphic designer, Ruttmann’s swelling and shifting colour-shapes recall Matisse’s cut-outs. The gravity-defying movements resemble a kite-dance and the biomorphic forms sometimes suggest the deep ocean’s fantastical creatures.  There’s a sequence that’s like waves released from the tide’s lockstep rhythm and reveling in free expression; another that looks like a sun rocking in a child’s swing; and a section where falling leaves seem to have acquired the ability to flock like birds.


Despite its restless invention - every second a new canvas of minimalist abstraction – Ruttman was dissatisfied with his debut effort, much preferring later instalments in the series:  the twilight swirl of Opus II, the rectilinear fantasia of Opus III, the stark grid patterns of Opus IV.  Alongside these abstract short films, Ruttmann created more figurative animations for adverts, the non-animated masterwork Berlin-Symphony of a Metropolis and – bizarrely – a sound-only film, Wochenende.  He also contributed a dream sequence to Fritz Lang’s movie Siegfried.  But taking a less salubrious turn, Ruttmann’s later career saw him working with Hitler’s favorite film maker Leni Riefenstahl on The Triumph of the Will and making propaganda reels. He died in 1941 from injuries incurred as a war photographer on the Russian front.
- SR 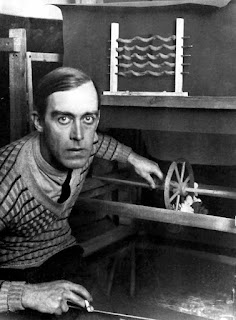 Posted by SIMON REYNOLDS at 6:30 PM No comments: