Posted by SIMON REYNOLDS at 1:52 PM No comments:

"Mimi Garrard was a dancer with Alwin Nikolais. He produced her concerts at the Henry Street Playhouse for ten years and then she toured under the National Endowment Touring Program for many years. In collaboration with James Seawright, her work was commis­sioned for CBS Camera Three and WGBH Boston television. She created more than ninety works for the stage that were performed throughout the United States and in South Amer­ica." - https://mimigarrarddance.com/ 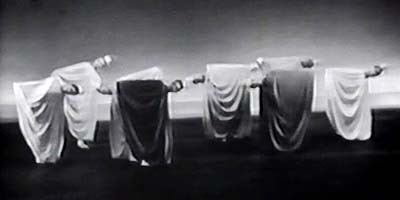 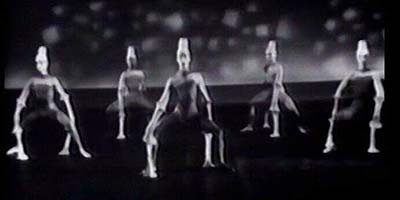 Posted by SIMON REYNOLDS at 10:48 PM No comments:

One of the great modernist choreographers of the 20th Century, Alwin Nikolais used light design, costume, make-up, electronic sound and the moving human form to create enthralling spectacles that hovered somewhere in-between ballet, kinetic sculpture, avant-garde fashion, and ritual ceremonies from the far future or from some alien civilisation.
"It is impossible for me to be a purist; my loves are too various for that," Nikolais wrote in 1966. "I look upon this polygamy of motion, shape, color and sound as the basis of the theater." The multi-sensory impact of his work is conveyed in titles like “Fetish (ritual of shadows and blades of light),” “Prismatic Forest (maze of colored bars before infinite vista)”and “Glymistry (parts of people and things illuminated in glows of colored light).”
Born in Connecticut in 1910, Nikolais pioneered the use of side-lighting in ballet, as opposed to the traditional way of illuminating from above. He deployed “shinbusters” to bounce light off the performers’s bizarrely costumed bodies, pushing the spectacle towards abstraction. Some of his pieces involved dancers carrying flashlights or little lanterns, or wearing internally-lit tubes that sheathed the dancer’s arms and legs.
As well as inventive light-design, Nikolais devised the sci-fi garments, masks, wigs, and head-bands that his dancers wore, some of which anticipate Bowie’s more outlandish costumes of the early Seventies. If that wasn’t enough, Nikolas also composed his own music, using tape-editing and a variety of sound “conditioning” techniques to transform percussion and other acoustic instruments. Later, he would be an early adopter of the Moog synthesiser.
Webbing a troupe of dancers within a cat’s cradle of elasticated ribbons, “Tensile Involvement” (1953) is probably Nikolais’s most famous piece and can be seen in recreated form as the opening credit sequence to Robert Altman’s 2002 ballet film The Company. Also created in 1953 but here performed in 1993 as part of a posthumous Nikolais retrospective, “Noumenon” is less kinetic than “Tensile Involvement” but even more disorienting. The dancers are completely encased in a cocoon of Lycra fabric, which kinks and ripples as they gyrate and contort sightlessly within. The human body becomes a generator of planes and folds of abstract texture. The title “Noumenon”, incidentally, comes from philosophy and refers to objects that reason can conceive but which are not knowable by the senses.
This excerpt from “Noumenon” belongs to a longer survey of Nikolais’s oeuvre that can be found on YouTube. As for his music, look out for Choreosonic Music of the New Dance Theatre of Alwin Nikolais, originally released in 1959 but reissued a few years ago on the Cacophonic imprint. A 1993 collection of Nikolais’s later purely electronic and digital scores can be found on streamers like Tidal and Spotify.
There is an extensive tradition of experimental composers who worked closely with avant-garde choreographers, from John Cage’s partnership with Merce Cunningham to musique concrete visionary Pierre Henry’s collaborations with Maurice Béjart. But Nikolais appears to be unique in creating his own electronic scores. Before moving into the dance field, he worked as a musician, providing keyboard accompaniment to silent movies. When he started to create his own dance pieces, Nikolais recorded his own scores, always creating the sounds after the choreography was written, as a series of “motion-cues” timed for short sequences of dancing. Sound generated from acoustic instruments or from materials and objects (“tubes, pipes, pieces of wood, aluminum, steel and tin containers, glasses, elastic bands, coils of wire”, according to the Choresonic liner note) were subjected to various processes using the tape recorder: “speeded up or slowed down, interrupted, ‘pulsed’, reverberated, reversed [and] superimposed.” Just as his choreography, costumes and lighting worked to break up the human form into abstract motion-shapes, Nikolais was keen to avoid the “identification of sound sources” and strove to encourage listeners to hear “the sound itself divorced from its initial derivation.”
A true polymath seeking to create total art experiences, Nikolais was – as Jack Anderson wrote in his 1993 New York Times obituary – “not merely a choreographer” but also “a wizard… a prophet, and a wonderful entertainer.”
— SR 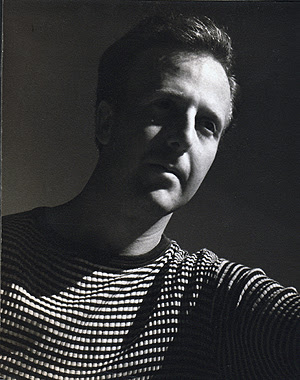 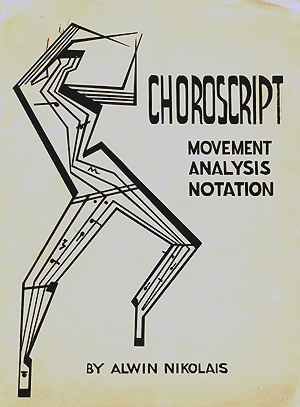 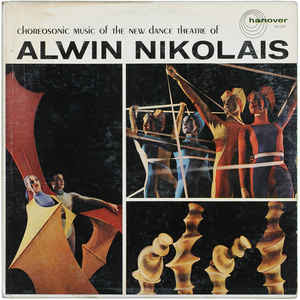 Posted by SIMON REYNOLDS at 1:28 PM No comments: