"It is one of the most stirring animated films in the history of animation. In a simple, but powerful way Czekała presents a horror that happened in concentration camps – prisoners’ dread, humiliation, and lost humanity. The everyday roll-call ends tragically because of prisoners’ “insubordination” in this black and white film. The Roll-Call crossed borders of what can be presented or not in animation. It is sometimes interpreted as a response to the trend of allegorical and philosophical films that dominated Polish animation in the 1960s."
- Animaphix


"Czekała was one of the reformers of Polish animation in the late 1960s and early 1970s. What sets him apart from our other animation artists? First of all, his focus on the plot of a film, his way of treating material in a way that brings animated film closer to feature film or documentary. Therefore it is the themes, which seemed reserved for feature films and documentaries until Czekała's animation appeared. He has said,

"I take the themes for my films from everything around me [...] I model the matter of my films from everyday life accessible to everyone [...] eliminating all the formal ornamentation and spectacular material - I select the form to match what I want to say. What I say are simple things. (Polska 5/1971)

"Today it seems obvious that an animated film can tell a story, that it can be subtle, expressive, close to people's hearts, yet still remain an animated film. This has been proved by Czekała's successors, mentioning especially Piotr Dumała. Though critics point out that Czekała's films might just as well have been told with actors, the formula of animated films give them additional meanings, greater expression, strengthening an impression that maybe the same stories told traditionally could not have created.

"What were those stories? Ptak (The Bird, 1968) - the main character dreams of freedom, its substitute being freedom for a bird that he is saving up his pennies to buy. Syn (The Son, 1970) - the loneliness of parents abandoned in the countryside by their now "urban" son. Finally, Apel (TheRoll-Call, 1970) - a shocking picture of life in a concentration camp, a story of fear, humanity and the inhumane camp system. These stories could have been told differently. However, what Czekała did when he made these three films can be compared to the contemporary achievements of Art Spiegelman, author of the Maus comic book, and Zbigniew Libera, who proposes that we build ourselves a concentration camp from Lego yoy bricks (LEGO Concentration Camp), where the material adds meanings but also forces people to take an aloof look at the consumers of things that, one would think, are impossible to consume.

"Andrzej Kossakowski wrote that with Apel (The Roll-Call), Czekała contributed to overcoming certain mental barriers: "It's true that animated films have long come out of the nursery ... but not all issues seemed possible to transfer to the world of animation." The director also showed that animated films can be used "to speak about serious matters seriously, without that seemingly necessary wit, that 'tongue in cheek'," something that had seemed reserved for documentaries or acted films. (Film 50/7)

"Ryszard Czekała's proposal was interpreted by many critics as a reaction to the ossification of philosophical films, which dominated the 1960s. Czekała confirmed this:

"I simply don't really like animated films which are allegories, or films which are philosophical tales, where people and objects have symbolic meanings. I want to show specific events and situations. My only concern is that they be evocative. ("Film" 25/1970)
As Kazimierz Żórawski writes:

"The works of Ryszard Czekała are a natural and conscious reaction to the philosophical or rather pseudo-philosophical aspirations of many makers of animated films, to those films - parables of the world, films - syntheses of existence, films - grand symbols. 'Ptak', then 'Syn', and finally [...] 'Apel', are works telling simple and uncomplicated stories, where the simplicity is intentional, it is an artistic method [...] The aim of a realistic story line supported by a visual setting reminiscent of documentaries, is to bring the author's thoughts closer to the viewer." (Kino 10/71)

"It is worth noting this comparison, because it comes up in texts by critics analysing Czekała's early animated films. Alicja Iskierko compares them to documentaries in her book Znajomi z kina. Szkice o polskim filmie krókometrażowym / Cinematic Acquaintances. Sketches on Polish Short Films (Warszawa 1982). So does Kazimierz Żórawski, mentioned earlier, many times in fact, writing even more explicitly:

"His films give [...] the impression of being "documentaries" transposed to the language of animated film, not only in the images which Czekała composes three-dimensionally, but equally, thanks to the themes and references to reality, in moving from the realm of"'thinking" to the realm of "feeling". (Film 12/71)

"In fact, Czekała comes much closer to feature films. The drama of his works, the way he leads the camera, the rhythm, sound, the precise and extremely meaningful editing similar to that of features, the use of detail, all this gives them an affinity to feature films.....

"I try to create a certain evocative vision of the world in my films which would make the viewers forget they are at the cinema. The audience should feel participants in the events, they should identify themselves with the characters. [...] Even a world drawn on paper can look enough like genuine reality for the viewer to believe in its existence. Even a drawn person can betray their personality, their feelings. (Film 9/1971)

"Asked point blank if that meant he wanted to make feature films, he replied:

A producer who can narrate an event with the help of drawings should also be able to narrate it with the help of staged shots. ... We should think in film terms, not in terms of graphic art, painting, or theatre. To a filmmaker all these disciplines are only an element of directing. (Film 25/70)

"As Kazimierz Żórawski writes (Kino 10/71), Czekała emphasised that he thought in film images from the start, including the sound, or maybe even initially he heard his films more than he saw them. That's an important confession. It is exactly this equal value of story line, sound and image that constitutes the value of Czekała's films. Żórawski writes:

"It is that naturalistic and surreal sound to which the black-and-white images in Ptak are synchronously set, which creates images of the loneliness of a hunched man, and in Syn the loud swallowing of soup, the sound of a piece of bread falling to the ground, the quiet splash of a tear flowing down the father's cheek and hitting the smooth surface of the liquid filling his plate, finally the rustle of the newspaper as the son reads it, create the mood and the audience's emotional reception.

"After he made his feature debut Zofia / Sophia (1976) and abandoned animation for 10 years, Wanda Wertenstein wrote that a careful observer could have predicted that Czekała would find animated film too confining. In his three early pieces, "Their graphical realism was not far from photographic realism, while the notional, philosophical aspects were shaped by classic means of expression of narrative cinema - the choice of standpoints, light gradations, editing, the relation of image and sound. The drawn figures were surrogate actors, the animated cut-outs - a substitute for real gestures." (Kino 10/76).... 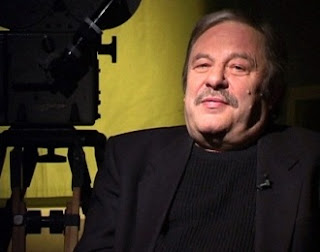 Posted by SIMON REYNOLDS at 2:27 PM